This weeks ch-allenge - Lou want : 12th July Challenge- Oh La La
The 14th of July marks the French public holiday of Bastille Day so to join the French in their celebrations I would like us to make something with a French feel. It could be the image, it could be a french sentiment or it could just make you say Oh La La! It might even be just in the colours of the French flag, it's up to you! Just have fun!
Oh and don't forget to use one of the Charmed downloads! 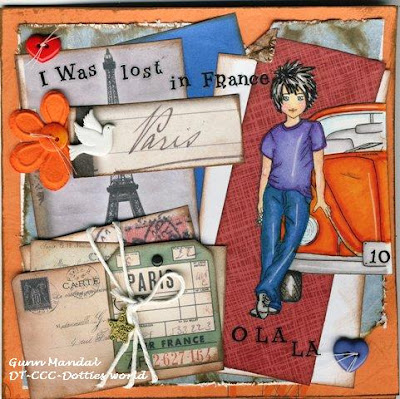 This is what I came up with. I had an Idea, but I have to admit that the result wasn`t quite what I wanted. But this is what you get.

Receipe:
Cardstock: ClubScrap
Pattern paper:
Hot of the press, Tim Holtz
I also used some old emphera postcard and tickets that I had for several years. They are produced in Australia, but I can`t remeber the company.
Alfbeth are some stickers, have no idea from where. The text I remember from Bonnie Tylers song from the Eightees, so I just had to include it on the card. ( I really liked the song)
A prima flowers and some shaped buttons. And my charmed downloads this week is Mickey with his cute car. You can find him her.

So head over to Dotties World an see what the Other DT members have done for this challenge.
Made with love Gunn (Merete) kl. 23:40

I like the way you tied the letters with string. Nice touch.

I think your card is amazing, I wouldnt have thought of doing anything like that you are so talented , huggies June xx

Wow Gunn, your card is stunning!!, I love the colours in this one & Mikey looks so chilled the leaning on the car & what a fab colour for a car too!!..:).

Just a fantastic card. I love all the details, everything fits together just perfectly. Super work!


Hello and velcome to my blog. I am so pleased that you take the time to visit. Be velcome to leave a comment and your page link so I can pay you a visit.

These are for my inspirations